Moms at BAM: A Fishbowl Conversation

Each month, BAM hosts a DEI Session for all BAM employees. In these conversations, BAM employees aim to educate each other, give time to reflect on important topics, and use a “fishbowl” style of co...

Flock Freight has created a new way to ship freight

Flock Freight is a freight logistics company changing the way freight is shipped with a new mode called shared truckload. The goal? To help shippers pool multiple smaller loads, that otherwise wouldn’t fill a truck, onto one truck heading the same direction. These loads, which would typically be shipped via less-than-truckload mode that would stop in hubs along the way, are now able to avoid hubs and keep loads from being lost or damaged along the route.

“From the start, our BAM team has taken the time to deeply understand our business and industry, which are quite complex,” said Jeff Lerner, Vice President of Marketing at Flock Freight. “BAM has been able to achieve the results we desired every step of the way, and live up to my high standards, which I warned them of from the start. I’m confident they will continue to support us as the company grows, and so do our goals.”

BAM started working with Flock Freight at the start of 2020 and has managed two funding announcements and a successful brand awareness campaign. At kickoff time, the company’s core offering — shared truckload — was a newly-devised term. The industry was prime for this disruption and a new story. The BAM team focused on establishing Flock Freight as an industry change-maker, driving brand awareness among core audiences, and supporting its Series B funding round. The team secured a feature in VentureBeat, which included an interview with founder and CEO, Oren Zaslansky, where he highlighted the company’s differentiators and benefits for both carriers and shippers.

The BAM team then secured an opportunity with Forbes, where Oren explained the AI and machine learning that drives the company’s algorithms. Within the logistics industry, BAM has secured coverage in all major trades including Freight Waves, Inbound Logistics, and Supply and Demand Chain Executive. 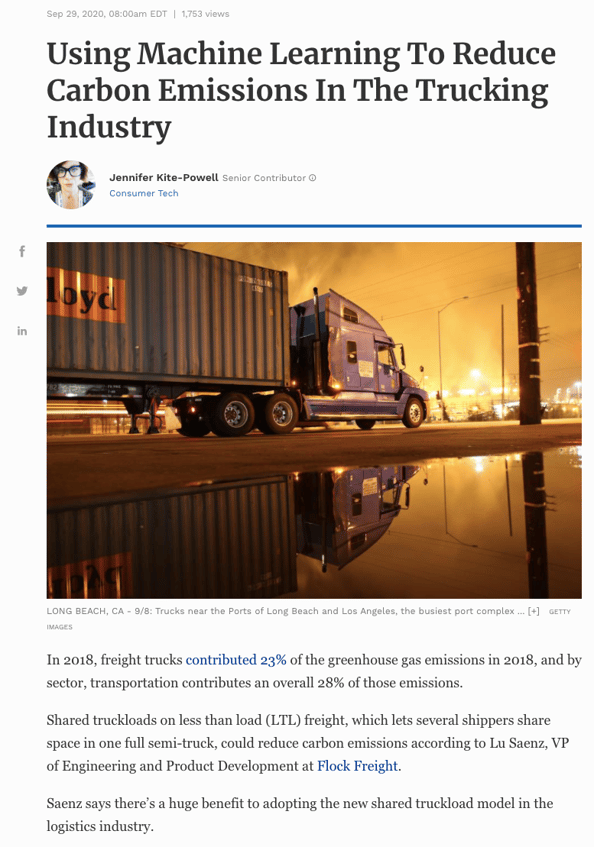 “Job well done and thank you for helping to put Flock Freight on the map,” said Oren Zaslansky, founder and CEO of Flock Freight. “After the funding announcement coverage, the amount of inbound I am receiving is overwhelming. Thank you for your hard work, and for supporting Flock’s continued success.”

“We built a campaign over the past year that has solidified Flock Freight’s position within the market as a true innovator doing something the industry has never seen done at scale before,” said Whitney Wells, Account Director at BAM. “We consistently garnered coverage that put Flock’s core differentiators and value proposition front and center. We’re looking forward to 2021’s post-funding campaign, where we’ll build on the successful footprint we’ve established, scaling our coverage alongside the business.”

Want to see how we’ve moved other stories forward? Check out our client stories.

5 Questions Your PR Agency Should Ask Before You Sign

When A VC Fund Shouldn’t Hire A Public Relations Agency

Your Industry is Hot — How Do You Maximize Your Reach?

5 Questions Your PR Agency Should Ask Before You Sign

Alex Wilhelm of TechCrunch+ answered your questions about technology and journalism.

In this BAM Book Jam, we sat down with Charmaine Wilkerson to talk about her novel, "Black Cake."

We chatted with Alex Konrad of Forbes, Marlize van Romburgh of Crunchbase News, and Melia Russell of Insider.

Moms at BAM: A Fishbowl Conversation

The Magic of Connection: Your Work Retreats Don’t Have to Suck

Your Industry is Hot — How Do You Maximize Your Reach?